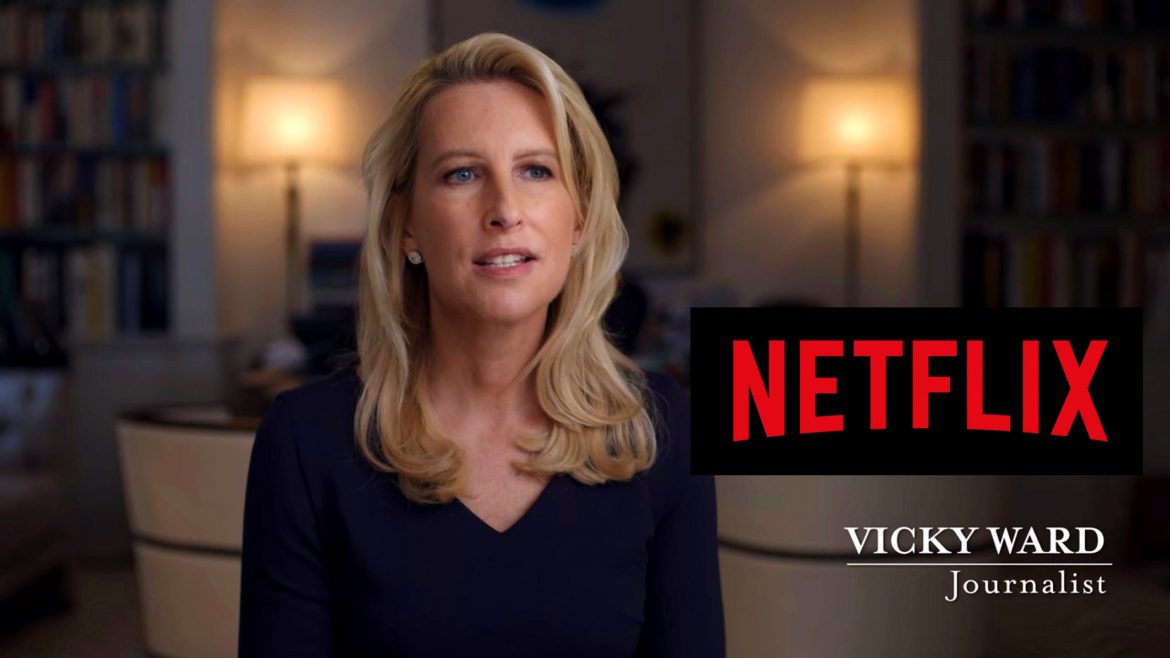 Here are a couple of screen grabs and a BTS photo of the interview I shot with journalist Vicky Ward that kicks off the new Netflix documentary Jeffrey Epstein: Filthy Rich. This was shot in Vickie’s home with her seated in the living room and her office as a backdrop. This tells the story that she is a journalist and allowed me to pull her away from the background giving the shot some depth. I also like the way her desk is curved and I positioned her between the 2 “waves” which ancored her in position and draws your eye to her.

We used 2 Panasonic Varicam LT cameras. For most of the interviews I shot for the doc I wanted a softer look so I used Zeiss Super Speed MKii lenses. Sometimes they were wide open, other times I closed down a stop or 2. The sharpness of these lenses varies so I tried to keep a consistent look. In this case, B camera needed to get really close, so we used a Fujinon Cabrio 85-300. I added a Tiffen Classic Soft to take the edge off the sharpness and better match the Super Speed on A camera.

Lighting wise I went for a soft look, but still wanted to retain some contrast in the image so it wasn’t flat. I keyed with an Arri S60 book light and had an eye light as well as a few white bounce cards carefully placed to give her face the most flattering light. I used the practical lamps in the office to give the background life. I also kept a window open on frame left to give color contrast and make the inside tungsten light feel warmer. I had a Litemat 2L accenting the window light and also had a tungsten source filling in the office. Getting this shot to look interesting was all about balancing the levels of each light and making subtle adjustments to their direction and intensity to get everything in perfect balance.