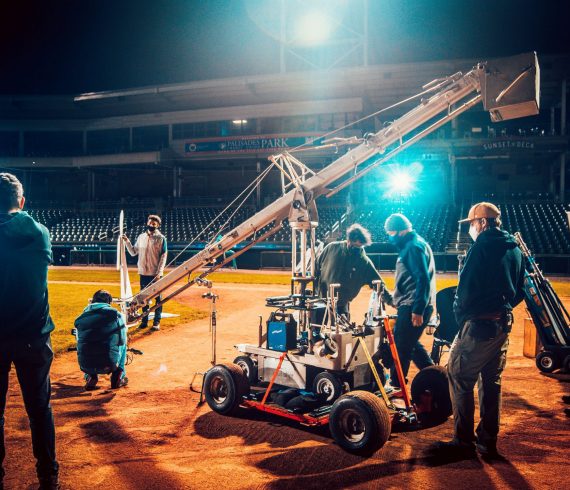 by Bill· October 13, 2020· in Blog· 0 comments tags: Behind the Scenes, Bill Winters, BTS, Cinematographer, Cinematography, MLB, MLB Network, Opening
My first thoughts when hearing EXT baseball field night are 18K’s, condor, maybe something soft overhead on a crane arm. However, on the tech scout we quickly realized that this shoot was different because we were shooting cardboard cutouts and background plates vs live 3 dimensional action. Also, we had 10 of these scenes to shoot with less than 12 hours of night so we needed to move extremely fast. Gaffer @tank_lights_you_up and best boy  @scotts_been_shootingsuggested taking an approach that lets us be very mobile and fast. Our main lights sources were Arri M40’s and M18 running on Honda 6500w generators. They quickly wheeled the lights with their accompanying generator anywhere we needed it.  We were able to go smaller and more mobile because we are able to use the stadium lights to give us a general ambiance. The key is that we had control over which stadium lights could be on and off. We turned on stadium lights that gave us backlight and turned off any lights that gave us front light.  The stadium lights and our movie lights were all backlighting the stadium seats and cutouts, so we needed some light on the cardboard cutouts. This was done with one one […] Read More 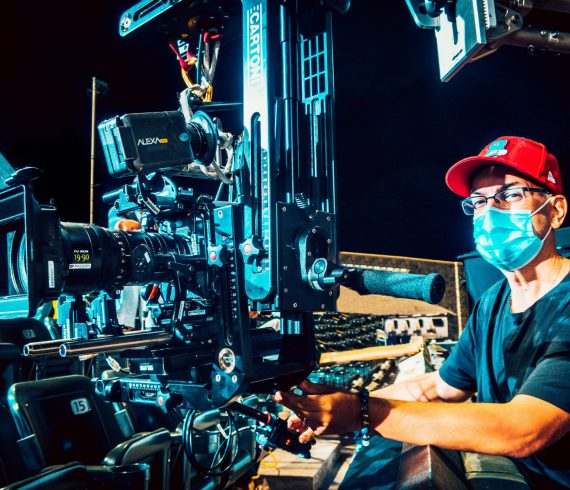 by Bill· September 21, 2020· in Blog· 0 comments tags: Behind the Scenes, Bill Winters, BTS, Cinematographer, Cinematography, MLB, MLB Network, NLDS, Opening
Rocking an Arri Alexa Mini on a Lambda 2 head and Fisher 23 jib arm. We had a couple of M40s banging diretly into the lens creating some nice flares. The MLB playoff opening was a really cool shoot with some interesting challenges. I am excited to share some detailed BTS posts with you after it airs. Stay tuned! Read More