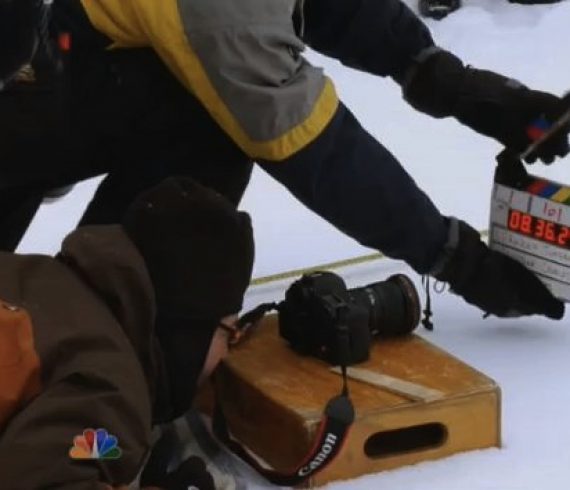 by Bill· January 22, 2010· in Blog· 0 comments tags: cold, Duluth, ice fishing, jerry seinfeld, the marriage ref, tom papa
Holy crap I just got like totally famous! They say everyone gets 15 minutes of fame. Well, it looks like I only got about 15 frames, which is approximately 1/2 second but I’ll take it. NBC is playing the behind the scenes footage of a commercial I shot for Jerry Seinfeld’s new show “The Marriage Ref” in heavy rotation. Last night it was on during Jay Leno’s show. If you look carefully you can see me lying on my belly on a sheet of ice in –15 degrees lining up a shot of Jerry’s shoe. OH the glamour. I think the difficult conditions were worth it though. The clips from the spot look good and it will be a fun piece. Jerry and Tom were real troopers to be out there for hours in loafers and thin jackets. The other troopers were the awesome crew including my man Clair Popkin – camera assistant extraordinaire, cool as ice director Christian Charles, and the legendary Bob Fisher. Thanks to Jay Lavely a.k.a. Jay Lovely for the use of his lens and polarizer which were on the camera 90% of the time. With all of the traveling I do, I hope I won’t […] Read More